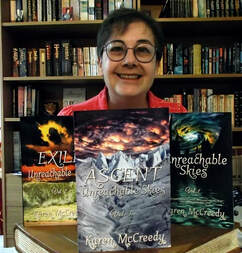 I retired in 2018, and now enjoy spending more time with family and friends, pursuing interests old and new - and, of course, writing.

I love reading, watching and writing science-fiction, and have had a number of short stories published in various anthologies. I've also had articles on British films and history published in magazines and online.

My first novel, 'Unreachable Skies' (Book 1 of a trilogy) was published in August 2018, and is available from Mirror World Publishing, Amazon, Waterstones and other outlets. It's the story of Zarda, an apprentice Fate-seer on a planet where it is normal to fly. Only half-trained, she is ill-equipped to deal with the consequences of a plague that has resulted in wingless hatchlings. Efforts to fight prejudice and superstition lead to death for some and exile for others; while Zarda’s own journey to understanding her role in events may lead her to abandon all tradition in order to protect her peoples’ future.
The second book, 'Exile: Unreachable Skies II' was published by Mirror World in September 2019. The third book in the trilogy, 'Ascent' was published in September 2020.

​Meanwhile, I have another idea to work on...

Favourite meal: One shared with friends and/or family